It’s a mashup of lo-fi, vaporwave, R&B, early 90s underground hip-hop, and trip-hop all blended to create a raw psychedelic trip for your ears and soul to digest – best accompanied with a set of high-quality headsets or a banging sound system of course.

Unlike other forms of hip-hop, rapping and singing aren’t the main priority. Melody, effects and production quality are king here, so in simple terms if the beat sucks then the song doesn’t exist. These elements help to embrace the listener’s mind to halt thinking and just let their imagination roam freely while expressing itself without any limitation, thus giving off a sense of a high. Personally I like to refer to it as “Anti-lo-fi” genre. Artists such as Soudiere, Skucci, sin, DJ Smokey, and the Holy MobGang are prime examples of how the genre should be executed superlatively. The excessive usages of pop culture references in sound effects raging from Yoshi’s iconic videogame death sound to infamous Grand Theft Auto, popular Anime and Cinema memorable quotes, to heart stopping pauses, tactile percussions, head bopping chops, menacing 808 patterns, and clever usages of panning be it used to hi-hats, vocals and/or 808 loops.

Legendary Phonk producer Soudiere has mentioned in an interview that he loves sampling weird audio, and has recorded car alarms and train noises to create distinctive atmospheres and textures that best compliment and suit his music. Soundcloud producer sin is heavily recognised by the Phonk community for including modified JDM cars in his samples and album art, presumably to evoke a sense of high velocity or late driving in a modified Japanese spaceship. 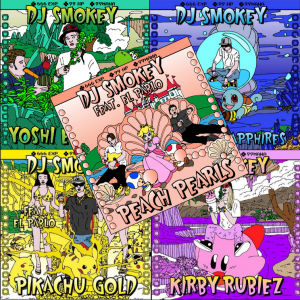 Phonk has also given birth to some amazing remixes and mashups of mainstream and underground music be it new or old. Top Dawg rapper, Schoolboy Q’s Gold Certified hit Numb Numb Juice (2019) can heard sampled as a chorus in Million by Soundcloud producer sin. Quality Control female rapper, Cardi B’s Multi-Platinum Certified hit Bodak Yellow’s lifeless beat had been brought to life on a paranormal scale by Soundcloud Producer Amastu-Mikaboshi in his track Triton. Early 2000s Popstar Kelis’ hit single Milkshake can be heard remixed on multiple records and most famous is by DJ Smokey on his EP Peach Pearls (2018).

“Creepin’ never sleepin’, duckin’ and divin’ as I do my thang”

It’s unclear when Phonk exactly debuted but its roots can be traced back to the early 90s to a genre called Memphis Hip-hop, a regional sub-genre of Hip-hop. The name comes from the city that it originates, Memphis Tennessee USA. According to Wiki “It has been characterized by its often low budget, repetitive production and its occasional lo-fi sound that also heavily utilizes the Roland TR-808 drum machine and minimal synth melodies, as well as double time flows and samples ranging from soul and funk to horror film scores and classical music, as well as hooks from songs by related rappers in the same genre, although DIY production without sampling is common as well”. It is also safe to mention that this genre is not afraid to embrace darkness, illegal substance usage, destruction and satanic references. The beats and flows however sound surprisingly way ahead of their time, tracks like Lo Key – Devil Shit (1994), DJ Paul – Neighbourhood Hoe (1994), Triple Six Mafia – Ridin In The Chevy, Niggas Aint Barin Dat (1991-1994) can easily be mistaken for being late 2010s hip-hop/trap tracks.

New York rapper, A$AP Rocky’s debut mixtape Live. Love. A$AP (2011) was the first mainstream mixtape to utilise the classic sound while bringing something fresh to the table and has been received positively by critics and fans alike. At the time it wasn’t directly referred to as “Memphis rap” but rather as “Cloud Rap”. Florida rapper, Denzel Curry is heavily influenced by it from his choice of flows, to having featured Memphis producer and rapper SpaceGhostPurrp on the mixtape King Of The Mischievous South Vol 1 Underground Tape 1996 (2012) and using the cult classic Devil Shit by Lowkey (1994) as an instrumental for his False Gods freestyle (2020).

One of DJ Smokey’s earlier works Da Smoke Tape Vol.1 (2012) mixtape was heavily influenced by the genre. All of the elements it incorporated were present except for the rap aspect, alternatively vocals and melodies from older Memphis tracks were used. The production was better and sounded cleaner, but the vocals for the most part remained partially inaudible. However it didn’t matter to dedicated fans that grew up listening to the older tracks since this evoked a sense of nostalgia and formed a new game of spot the sample/flip amongst each other. Occasionally this allowed people to sing along upon hearing the tracks for the very first time. The dark atmospheres and satanic references were toned down in favour of heavier explicit substance references. Pop culture sound effects although minimal and chopped beats surfaced as well and over time the genre gained popularity and soon evolved into the phenomenon known today as Phonk music.

“Hey I know you don’t smoke weed, I know this…but imma get you high today cos it’s Friday…you aint got no job and you ain’t got ish to do” – Smokey

Memphis is still alive today under the radar and has many artists keeping the flame and tradition alive, however it’s heavily overshadowed by Phonk. You could argue that this phenomenon displays a striking resemblance to fall of Hip-hop’s reign caused by its ever so popular descendant Trap, be it on an underground level of course. YouTube and Soundcloud channels such as R y a n C e l s i u s ° S o u n d s, Smooth Sounds, Memphis 66.6, rare and many more should be accredited for their assiduous contributions in promoting these aspiring artists to be heard by the masses.

Personally I grew up listening to instrumentals, I’d never really cared much for lyrics and had always preferred how good music sounded even if it has no meaning. Mainstream hip-hop/trap got cliché and lo-fi was just too depressing for my likes so I always yearned for something different that could feed my hungry soul. I remember listening to Phonk for the first time in 2017. I had randomly encountered Hood Got Me Evil by Soudiere while surfing for trip-hop music on YouTube, the experience felt unusual yet made sense to me. The intoxicating earth shattering bass drew firm goose bumps on my warm skin, my fingers tap danced to the heavenly melodies, the brisk sharp snares made my head bop uncontrollably and shortly a menacing smile tore open through my chiselled poker face.

Needless to say I was hooked, it felt like being in the company of an old friend and I’ve never left ever since.

To all the amazing YouTube, Reddit and Soundcloud commenters that gave light on old/rare tapes. Thank you for sharing your stories of the good old days of Hip-hop, Cloud Rap and Memphis.

View all posts by Abuti_Vally